Click on the thumbnails to view the full size image.

ATA-208    Sagamore
​President
By Greg Bishop: Cargo ships 'SS President Tyler', and 'SS American Reliance' behind her. Both have been scrapped since this photo was taken.For awhile before I was able to go out on the waters into the Suisun Bay ghost fleet, I would shoot from land. On the road out to MARAD I would drive the last 1/4-mile after the "do not cross this line" marking, to within 50 yards before the gate. I'd grab a couple of quick shots, then wave at the guard as I did a U-turn. Later-on, when I had clearance to enter while doing ship checks of the USS Iowa (BB-61), it was fun telling the guards "that was me"; they remembered my tan 4-Runner. Fortunately, they weren't "badge-heavy", and I never was 'challenged'.
MARAD had already rejected the historical status of the ship as not significant to be worthy of preservation, as they do most ships in reserve. The PRESIDENT was towed away from the raft of ships at the end of Row J, on March 8, 2011, and scrapped. maritimematters.com/2011/03/end-of-the-president-american...
In the short span of just over a decade the former PRESIDENT TYLER went from being a state-of-the-art freighter to a somewhat obsolete example of an earlier transitional era in cargo shipping. By the early 1970’s she was relegated to month-long voyages in Southwest Asia, sailing from Singapore as far west as Bombay, India and back via Pakistan, Sri Lanka, Malaysia and Indonesia. By 1976 the itinerary had been switched to two-week voyages from Hong Kong to Singapore and Jakarta, marketed to passengers under the hipper title of “Singapore Swing” cruises. By this time, her days as an American President Lines vessel were numbered. On August 30, 1979 they traded her to the Maritime Administration, with the name abbreviated to simply PRESIDENT, registered in Washington, D.C. The 18 year old ship was placed in the Ready Reserve Fleet at Suisun Bay where she quietly spent the next 31 years rising and falling with the tides.
The PRESIDENT TYLER was 563.75 feet long with a beam of 76 feet. The 13,223 gross ton cargo-liner also carried 12 passengers in 8 staterooms including a spacious suite. Public rooms were placed in an aft-facing location over two decks and included an observation lounge, a second lounge one deck higher with an adjacent card room and dining room. Outdoor deck space was provided on both levels. The ship’s complement included 60 crew members.
The map shows the ship's location on the West end of Row J, when I took the photo. 38.079075, -122.093467
Part of an extensive "Mothball Fleet" collection - - a set on Flickr Click here for more photos 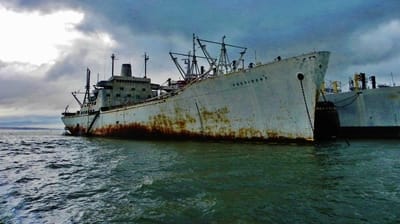 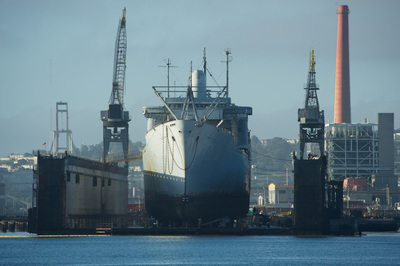 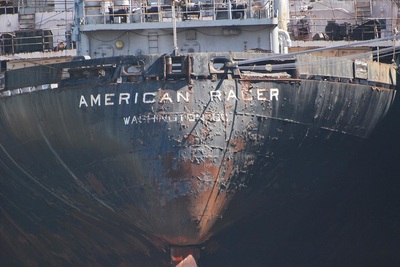 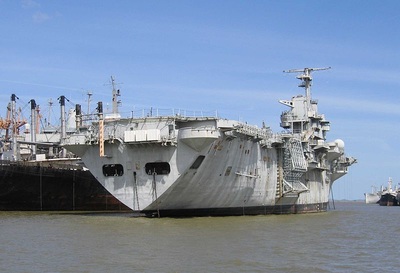